02:38
Game of the Year - Mobile Game Awards 2015 HD - Android - iOS
Game of the Year - Mobile Game Awards 2015 HD - Android - iOS For more on the top & best android games, go to: http://goo.gl/9IpRMs Best Android HD Games 2015: https://goo.gl/xFQ4Hn Top 5 Best Offline Android RPG 2015 HD https://goo.gl/fdtOjz Top 10 Best Upcoming Android Games 2016 https://goo.gl/Uq3Hl0 Like us on Facebook: http://goo.gl/ZtukHl Follow us on Twitter: http://goo.gl/kbvFcl www.androidgamespot.net Game of the Year - Mobile Game Awards 2015 HD - Android - iOS Join the biggest virtual event of mobile gaming to celebrate the best video games of 2015, vote for your favorite games,videos... Interact with other Android Gamespot gamers and enjoy the show, plus get a sneak preview of what's to come and more surprises only on Android Gamespot, your one stop for mobile gaming awesomeness! The toughest category yet, vote for Game of the Year! 3 ways to vote: 1 - If you're on PC, you can click on the annotation at the end of the video 2 - Click here to cast your vote http://bit.ly/22hExTk 3 - Drop a comment below making a vote for 1 out of the 4 nominees Subscribe to stay connected and get the latest updates on the best in gaming Android has to offer! http://goo.gl/9IpRMs
0 0   1554 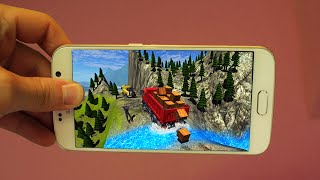 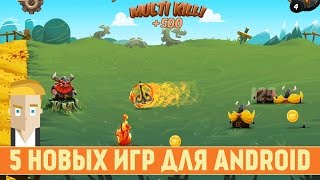 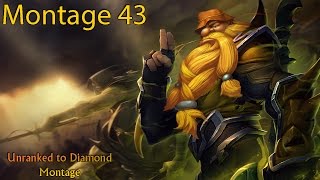 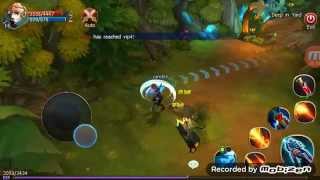 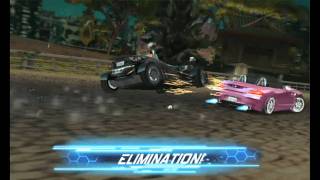 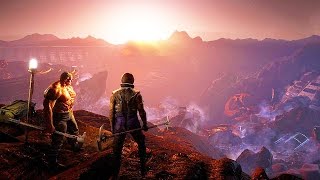 17:41
Upcoming Games in June 2016 Gameplay Compilation/Gameplay of the Best Games in June
In this video, we take a look at Gameplay from the Top 10 Upcoming Games in June 2016. Which of these titles are you interested in? Comment your thoughts on the Top 10 Upcoming Games in June 2016 Gameplay Compilation! These are Top 10 Upcoming Games in June 2016 Gameplay Compilation. This list covers games releasing on Playstation 4(PS4), Xbox One(XBO), PC and much more! Subscribe here! - http://bit.ly/GameCrossSubscribe Follow us on Twitter! - http://bit.ly/1QYqnTp Support Us by Using this Amazon Link! - http://amzn.to/1eQsQy2 #10 - 7 Days to Die- 7 Days to Die is an survival horror video game set in an open world developed by The Fun Pimps. It was released through Early Access on Steam for Microsoft Windows and OS X on December 13, 2013. Versions for the PlayStation 4 and Xbox One will be released in June 2016 through Telltale Publishing. #9 - Umbrella Corps- Umbrella Corps, known as Biohazard: Umbrella Corps in Japan, is an upcoming multiplayer-based survival horror shooter developed and published by Capcom for Microsoft Windows and PlayStation 4. It is a spin-off of the Resident Evil series, and is set to be released worldwide in June 2016. #8 - The Technomancer- The Technomancer is an upcoming science fiction-themed action role-playing video game developed by Spiders, who previously developed Mars: War Logs. Both games are set within the same universe and take place on the planet Mars. #7 - Lego Star Wars The Force Awakens- Lego Star Wars: The Force Awakens is an upcoming Lego-themed action-adventure video game based on the film Star Wars: The Force Awakens. It will be the fifth entry in TT Games' Lego Star Wars series. The game is scheduled for release on 28 June 2016, for Microsoft Windows, PlayStation 3, PlayStation 4, Xbox 360, Xbox One, Nintendo 3DS, PlayStation Vita and Wii U, to be published by Warner Bros. Interactive Entertainment under license from Lucasfilm. #6 - Mighty No 9- Mighty No. 9 is an upcoming action-platform video game in development by Comcept, in conjunction with Inti Creates, and published by Deep Silver. The creation of the game was based on the online crowdfunding website, Kickstarter,[2] and incorporates heavy input from the public. Mighty No. 9 very closely resembles Keiji Inafune's most successful work, Mega Man, in both gameplay and character design, and is considered as its spiritual successor. #5 - Odin Sphere Leifthrasir- Odin Sphere is a 2D fantasy action role-playing video game developed by Vanillaware and published by Atlus for the PlayStation 2. Originally released in May 2007, the game tells the interlocking stories of five different protagonists. Odin Sphere is considered a spiritual successor to the 1997 game Princess Crown[1] and takes some concepts from Norse mythology. Square Enix later published the game in Europe and Australia in March 2008. #4 - God Eater: Resurrection- A remake of God Eater Burst for the PlayStation 4 and PlayStation Vita, titled God Eater Resurrection has been released on October 29, 2015 in Japan. A Western release is set to summer of 2016 with North American and European divisions of Bandai Namco Entertainment publishing the game on PlayStation 4, PlayStation Vita, and Microsoft Windows. #3 - Star Ocean Integrity and Faithlessness (Star Ocean 5)- Star Ocean: Integrity and Faithlessness is an action role-playing video game developed by tri-Ace and published by Square Enix for the PlayStation 3 and PlayStation 4.[3] It is the fifth game in the main Star Ocean series after Star Ocean: The Last Hope and the ninth released game in the franchise, after the free-to-play card game Star Ocean: Material Trader. #2 - Mirror's Edge Catalyst- Mirror's Edge Catalyst is an upcoming open-world action-adventure platform video game developed by EA DICE and published by Electronic Arts. It is a reboot of 2008's Mirror's Edge and will revolve around Faith's origin and her attempt to overthrow a totalitarian conglomerate of corporations who rule the city of Glass. #1 - No Mans Sky- No Man's Sky is an upcoming adventure survival video game developed and published by the indie studio Hello Games. The game is scheduled to be released worldwide in June 2016 for PlayStation 4 and Microsoft Windows. ***Check these videos out!*** 10 NEW PS4 Games Gamers Want to See at E3 2016- http://bit.ly/1YomEP3 Every BIG Upcoming PS4 Console Exclusive in 2016/2017- http://bit.ly/1SN4G8C Top 10 Upcoming First Person Shooters in 2016/2017- http://bit.ly/234afB0 10 AWESOME Games Coming in Summer 2016!- http://bit.ly/1TRWAL3 25 Awesome Upcoming PS4 Games in 2016 and Beyond- http://bit.ly/23TFpgE Top 10 Upcoming PC EXCLUSIVES in 2016/2017- http://bit.ly/1shT8ku Credit for Outro Music- Deep Haze by Kevin MacLeod is licensed under a Creative Commons Attribution license (https://creativecommons.org/licenses/...) Source: http://incompetech.com/music/royalty-... Artist: http://incompetech.com/
0 0   1538 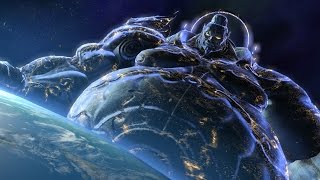 09:44
Top 10 Giants In Video Games
The bigger they are, the harder they fall. Join http://www.watchmojo.com as we countdown our picks for the Top 10 Giants in Video Games. Click here to subscribe: http://www.youtube.com/subscription_center?add_user=watchmojo or visit our channel page here: http://www.youtube.com/watchmojo Also, check out our interactive Suggestion Tool at http://www.WatchMojo.com/suggest :) Check us out at http://www.Twitter.com/WatchMojo, http://instagram.com/watchmojo and http://www.Facebook.com/WatchMojo. Special thanks to our user "Jack Morris" for suggesting this topic on our website http://www.Watchmojo.com/suggest Check out the voting page here, http://www.watchmojo.com/suggest/Top+10+Giants+in+Video+Games If you want to suggest an idea for a WatchMojo video, check out our interactive Suggestion Tool at http://www.WatchMojo.com/suggest :) Want a WatchMojo cup, mug, t-shirts, pen, sticker and even a water bottle? Get them all when you order your MojoBox gift set here: http://watchmojo.com/store/ WatchMojo is a leading producer of reference online video content, covering the People, Places and Trends you care about. We update DAILY with 2-3 Top 10 lists, Origins, Biographies, Versus clips on movies, video games, music, pop culture and more!
0 0   1532 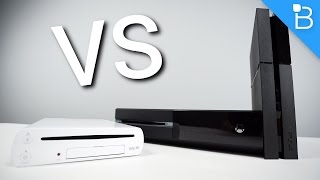 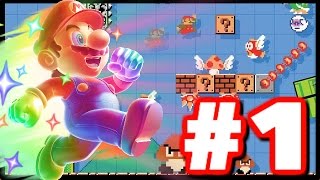 19:23
BEST MARIO GAME EVER! - Super Mario Maker - Super Mario Maker Wii U Gameplay Walkthrough Part 1
Super Mario Maker Gameplay Walkthrough Part 1 - Super Mario Maker Is The Best Mario Game Ever! We Play The Top Super Mario Maker Levels In Super Mario Maker Part 1! Super Mario Maker Part 1 Gameplay Walkthrough! The Mario experience of your dreams has arrived and is bursting with creativity... including yours! Play a near-limitless number of intensely creative Super Mario levels from players around the world. It’s easy enough to create your own levels with the Wii U GamePad controller that it may feel like you’re simply sketching out your ideas on paper, but you can now bring enemies and objects into a playable course in ways you could only dream of before. What was impossible in traditional Mario games is now impossibly fun, so let your imagination run wild! Features: Play a near-limitless number of Mario levels created by Nintendo and players around the world. Create your own Mario levels by using the Wii U GamePad controller touch screen to add enemies, blocks, pipes and more. Break the conventions of traditional Super Mario gameplay by blending enemies, traps and items into unexpected twists, like Piranha Plant-shooting cannons, power-up-tossing Lakitus, or even Hammer Bros. riding on Bowser while bouncing on trampolines. Touch control, instant editing and a robust online ranking and search system makes creating, playing and sharing a seamless process. Switch between four distinct themes, each with different art styles and features: Super Mario Bros., Super Mario Bros. 3, Super Mario World, and New Super Mario Bros. U. Transform into different characters at random with the new Mystery Mushroom item. Expand the roster of possible characters by completing 100 Mario Challenge mode or tapping compatible amiibo. Tap a 30th Anniversary Mario amiibo figure to the Wii U GamePad controller to add a Big Mushroom power-up to your course! Each retail copy of the game will come with a special booklet that offers fun ideas for designing courses. GET FREE GAMES! - http://bit.ly/MasterOv About Me: http://bit.ly/15xEg69 I record my iPad using the Elgato HD60 - http://e.lga.to/masterov Want To Send Me Stuff!? Here Is My Address: MasterOv Unit 2 Calcote Farm Coate, Devizes SN103LP Music By MDK! - https://www.youtube.com/user/MDKOfficialYT
0 0   1520 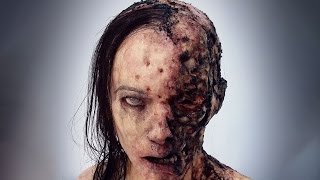 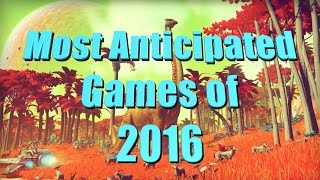 11:26
Top 10 Most Anticipated Video Games of 2016
If you haven’t gotten a next-gen console yet... now would probably be a good time. Join http://www.WatchMojo.com as we countdown our picks for the Top 10 Most Anticipated Video Games of 2016. Subscribe►►http://www.youtube.com/subscription_center?add_user=watchmojo Facebook►►http://www.Facebook.com/WatchMojo. Twitter►►http://www.Twitter.com/WatchMojo Suggestion Tool►►http://www.WatchMojo.com/suggest Channel Page►►http://www.youtube.com/watchmojo Because there’s so many great games coming out, we have to set some strict guidelines in order to keep this list at ten... with some very worthy honorable mentions, of course. We’re only going to be looking at games that have actual gameplay footage to base our judgments on. So as much as we loved the Mass Effect trilogy, Andromeda has to sit out. We’ll also do our best to limit this list to games that have an expected 2016 release date. So, we have to exclude Kingdom Hearts 3 – again. Special Thanks to our users "Jast Bish" "Basheer Rko" "FlorinP" "Shawn Mark" & "Gavin Bryce" for suggesting this topic on our Interactive Suggestion Tool at http://www.WatchMojo.com/suggest Check out the voting page here, http://www.watchmojo.com/suggest/Top+10+Most+Anticipated+Games+of+2016 Want a WatchMojo cup, mug, t-shirts, pen, sticker and even a water bottle? Get them all when you order your MojoBox gift set here: http://watchmojo.com/store/ WatchMojo is a leading producer of reference online video content, covering the People, Places and Trends you care about. We update DAILY with 4-5 Top 10 lists, Origins, Biographies, Versus clips on movies, video games, music, pop culture and more!
0 0   1514

The epic Legend of Ramayan is available as Android game for the first time ever. Fight demon asuras...
3 2   2953   Mobile

All the videos are property of respective owners.